The Christian Right is a powerful political force in the U.S., and it’s no coincidence that its members believe in a Jesus who aligns with their political views.

Right-wing influencers have weaponized the Bible as a political tool, according to a new book by UBC’s Tony Keddie, an assistant professor of early Christian history and literature. In Republican Jesus, Keddie shows how they’ve done it.

The book hits store shelves today—four weeks before the U.S. presidential election. We spoke with Keddie about it.

What makes your book different from others about the Christian Right? 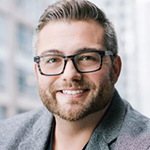 Republican Jesus is the first book written by a New Testament scholar on abuses of the Bible by the Christian Right. “Republican Jesus” is a metaphor for interpretations of Jesus that right-wing American Christian leaders have developed and popularized for nearly a century. I show how right-wing influencers have deployed a version of Jesus who is an unflinching proponent of Small Government: He rejects government funding for public health care, welfare, and environmental protections; he opposes the government interfering with an individual’s rights to life and guns; and so on.

However, when you consider how key gospel texts would have been understood by their authors and readers in the first-century Roman Empire, this context often invalidates the readings of modern Republican influencers.

Why is “Republican Jesus” so popular?

I think much of his appeal comes from the way that Republican Jesus puts a religious mask on the messy business of politics—specifically, how he puts a kind face on the hateful and exclusionary politics of white Christian nationalism. Republican Jesus really seems like a nice guy! He cares for the sick and poor, for instance. He just doesn’t think the government should get involved with helping them, because this robs individuals of the chance of loving their neighbours and thereby showing themselves to be true disciples.

What do you mean when you say that Republicans have rewritten the gospels?

Republican influencers have employed interpretive tactics like garbling English translations, omitting the literary context of verses by cherry-picking excerpts, and patching disparate passages together into a new harmonious narrative. I call this garble-omit-patch strategy the “GOP approach” when used by Republican influencers to interpret the four separate gospel narratives of Matthew, Mark, Luke and John.

What are some of the most problematic interpretations you’ve come across?

One that I find particularly perplexing is the claim that Jesus’s disciples being armed when he was arrested means that Jesus would endorse Christians owning semi-automatic rifles. The equation of a first-century dagger with a modern weapon of mass murder is indefensible.

At a broader level, you have the overarching paradigm that construes Jesus and his followers as Christians and his opponents as Jews. This simplistic Christian vs. Jew framework has been the cause of much anti-Semitism throughout history. Jesus and his earliest followers were Jews, and we have very little evidence of people self-identifying as Christians prior to the second century. By obscuring these complex dynamics of ancient identities, far-right interpreters have painted deeply problematic portraits of Big Government as a Jewish conspiracy.

What can be done to counter the influence of Republican Jesus in contemporary politics?

We need more voices from the middle to protest the abuses of the Bible by the right-wing Trump alliance. At the same time, journalists and academics on the Left need to dispense with the taboo about criticizing right-wing influencers’ biblical gaslighting. I hope that Republican Jesus will be a helpful resource both for centrists who are skeptical about how right-wing influencers interpret the gospels, and for progressives who are ready to dismantle right-wing interpretations in the run-up to this historic presidential election.