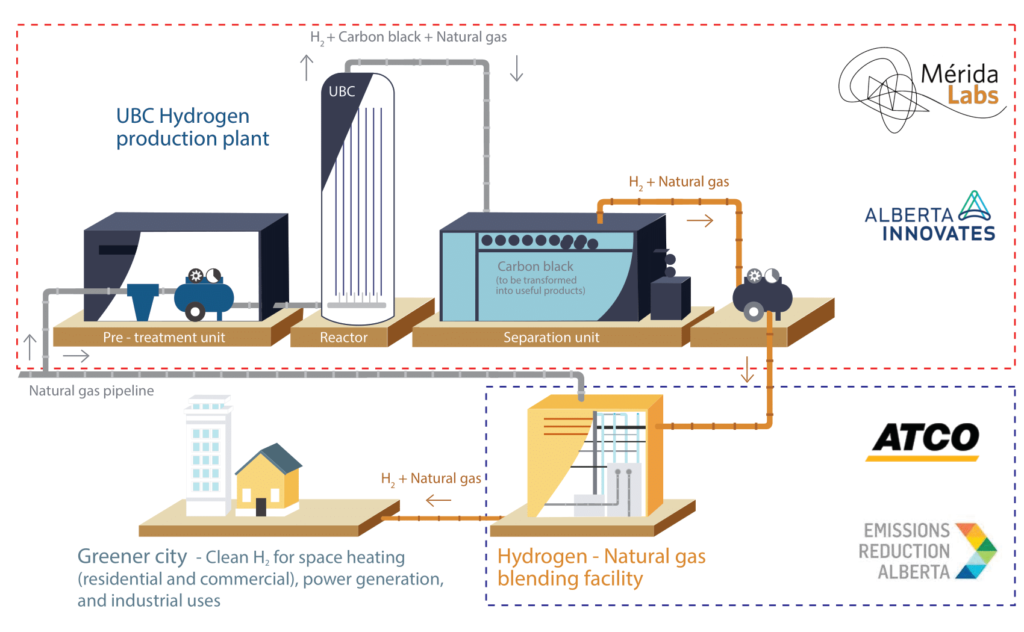 New hydrogen technology developed at UBC could soon be providing clean energy in Alberta, thanks to a $7 million project between UBC, the government of Alberta and Alberta utility company ATCO.

The technology developed by the UBC researchers—methane thermal cracking—can produce up to 200 kilograms of hydrogen a day using natural gas, without using water, while reducing or eliminating greenhouse gas emissions. The team will test their system at a facility in Fort Saskatchewan, Alberta, run by ATCO, Alberta’s largest natural gas distributor.

The project can help drop the cost of producing hydrogen to under $2 per kilogram, a goal set by the US Department of Energy to support hydrogen adoption, according to project lead Dr. Walter Mérida (he/him), a professor of mechanical engineering at UBC’s faculty of applied science. “UBC is a global leader in the development of integrated hydrogen energy systems. It’s very exciting to apply this innovation beyond our provincial borders, effectively extending UBC’s ‘campus as a living lab’ approach, in western Canada and potentially beyond,” says Dr. Mérida.

Doug Schweitzer, Alberta Minister of Jobs, Economy and Innovation, says “Technology and innovation is key to global economic recovery and global interest and investment in hydrogen is growing. This project will create jobs and help advance Alberta’s role as a responsible producer and supplier of clean hydrogen.” “SMR still emits a significant amount of carbon dioxide and uses large quantities of water and energy,” says Dr. Herrera. “Water electrolysis is another method, but it is costly and can emit even more greenhouse gases than SMR if the electricity used is from non-renewable sources. In contrast, our methane thermal cracking method can produce zero emissions—its only byproduct is carbon black.”

The project, funded by a $4.98 million grant from Alberta Innovates (which promotes innovation in the province) and industry contributions, can serve as a model for stronger inter-provincial collaborations, says Dr. Mérida, who also leads MéridaLabs.

“After we have successfully piloted this technology, we hope to apply it to other locations, possibly in B.C. as well as other provinces and regions,” said Dr. Mérida. “Hydrogen is a zero-emission fuel with many uses, and Canada is uniquely positioned to become a global leader in the development of hydrogen technologies and business models to power a low-carbon economy.”