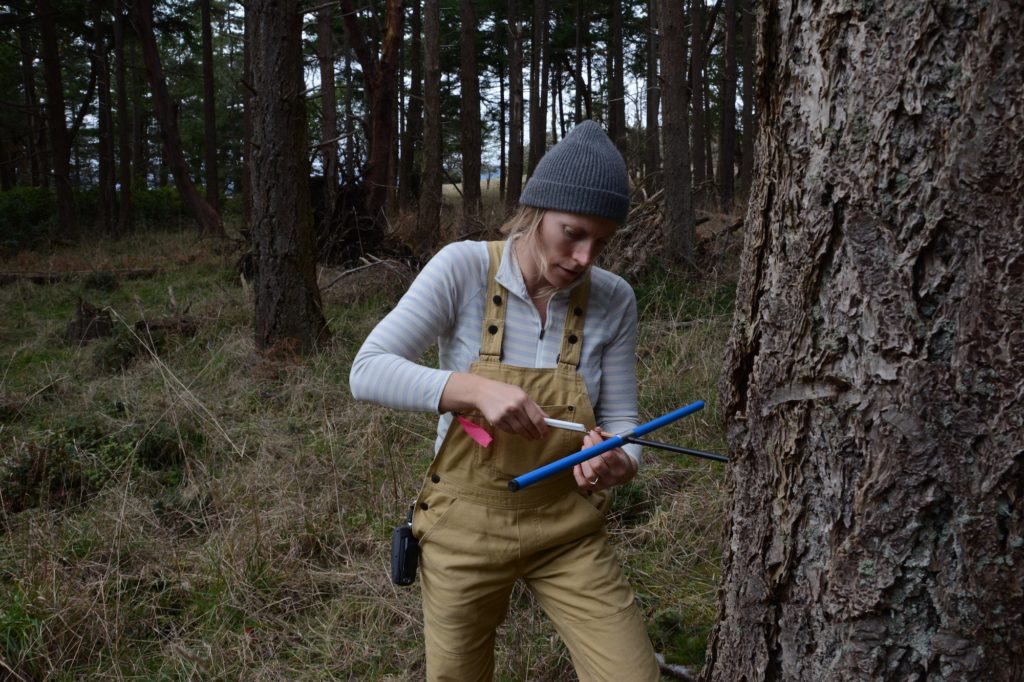 Dr. Kira Hoffman at work in Helliwell Park on Hornby Island where she and her colleagues were doing a fire history reconstruction of the site. Photo by Dr. Kira Hoffman

As wildfires blaze around the province, a UBC researcher reminds us that some types of fire can be life-giving and help protect the planet. In this Q&A, she discusses her latest research—published today in the journal Proceedings of the National Academy of Sciences—linking Indigenous fire stewardship with improved biodiversity across Earth’s major terrestrial biomes.

What is Indigenous fire stewardship and why is it important?

Indigenous fire stewardship is grounded in fire knowledge that is passed down through generations. My colleagues and I focused on one aspect, cultural burning, and how it erodes or enhances biodiversity. Cultural burning is used for many reasons: to clear land of potential fuel, protect homes from wildfire, and create patches for plants and animals to live and thrive. It’s a community-based practice, and the protocols and reasons for burning are specific to each community and culture.

For example, in Northwestern B.C., cultural burning in the sub-boreal forest happens in the spring and the fall, often while there’s still snow on the ground. These low-severity fires are used to clear dead and dry fuels and promote the growth of new plants, which supply fodder for wildlife.

Fires also replenish nutrients to the soils and are important in flood mitigation. When used at the correct time in the spring, you can get a lot of new growth, which absorbs excess water from the ground, thus decreasing the risk of flood in many communities.

Your study found that biodiversity is highest in regions that support Indigenous fire practices. Can you tell us more?

Much research has been done on how cultural burning affects fire-dependent grassland ecosystems, but this is possibly one of the first to examine the impacts of cultural burning on biodiversity across seven distinct biomes, including temperate and tropical rainforests, where cultural fires were once believed to be less common.

We reviewed 53 studies conducted across the globe from 1900 to the present day and found that 79  per cent of studies reported positive effects of fire on biodiversity, ranging from microbes to mushrooms, large mammals and reptiles, and of course many species of trees, shrubs, and grasses.

Fire was not used specifically to enhance biodiversity, but the practice of applying frequent, low-severity fires was—and continues to be—critical to supporting ecosystem biodiversity and habitat heterogeneity.

What does this mean for wildfire management and, more broadly, for the environment?

Many jurisdictions do not support cultural burning, in many cases banning them entirely. Over a century of widespread fire suppression related to colonization and land-use change has shifted human relationships with fire. And yet cultural burning is vital to reducing wildfire risk to ecological and human communities.

Increasingly warmer and drier conditions associated with climate change have created longer fire seasons and increasingly severe and uncontrollable wildfires. All this is threatening biodiversity, as well as displacing communities and creating lasting social, environmental and economic impacts.

“Conservation of Earth’s biodiversity is embedded in Indigenous fire stewardship” was co-led by Emma Davis and Sara Wickham in Dr. Andrew Trant’s Ecological Legacies Lab at the University of Waterloo. The open-access paper was published today in the journal Proceedings of the National Academy of Sciences.