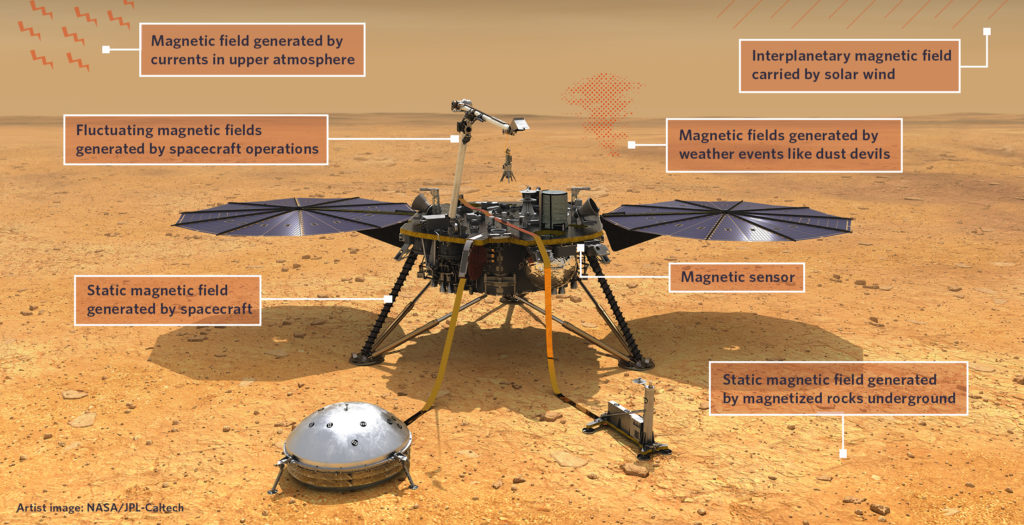 New data gleaned from the magnetic sensor aboard NASA’s InSight spacecraft is offering an unprecedented close-up of magnetic fields on Mars.

In a study published today in Nature Geoscience, scientists reveal that the magnetic field at the InSight landing site is ten times stronger than anticipated, and fluctuates over time-scales of seconds to days.

“One of the big unknowns from previous satellite missions was what the magnetization looked like over small areas,” said lead author Catherine Johnson, a professor at the University of British Columbia and senior scientist at the Planetary Science Institute. “By placing the first magnetic sensor at the surface, we have gained valuable new clues about the interior structure and upper atmosphere of Mars that will help us understand how it – and other planets like it – formed.”

Zooming in on magnetic fields

Before the InSight mission, the best estimates of Martian magnetic fields came from satellites orbiting high above the planet, and were averaged over large distances of more than 150 kilometres.

“The ground-level data give us a much more sensitive picture of magnetization over smaller areas, and where it’s coming from,” said Johnson. “In addition to showing that the magnetic field at the landing site was ten times stronger than the satellites anticipated, the data implied it was coming from nearby sources.”

Scientists have known that Mars had an ancient global magnetic field billions of years ago that magnetized rocks on the planet, before mysteriously switching off. Because most rocks at the surface are too young to have been magnetized by this ancient field, the team thinks it must be coming from deeper underground.

“We think it’s coming from much older rocks that are buried anywhere from a couple hundred feet to ten kilometres below ground,” said Johnson. “We wouldn’t have been able to deduce this without the magnetic data and the geology and seismic information InSight has provided.”

The team hopes that by combining these InSight results with satellite magnetic data and future studies of Martian rocks, they can identify exactly which rocks carry the magnetization and how old they are.

Day-night fluctuations and things that pulse in the dark

The magnetic sensor has also provided new clues about phenomena that occur high in the upper atmosphere and the space environment around Mars.

Just like Earth, Mars is exposed to solar wind, which is a stream of charged particles from the Sun that carries an interplanetary magnetic field (IMF) with it, and can cause disturbances like solar storms. But because Mars lacks a global magnetic field, it is less protected from solar weather.

“Because all of our previous observations of Mars have been from the top of its atmosphere or even higher altitudes, we didn’t know whether disturbances in solar wind would propagate to the surface,” said Johnson. “That’s an important thing to understand for future astronaut missions to Mars.”

The sensor captured fluctuations in the magnetic field between day and night and short, mysterious pulsations around midnight, confirming that events in and above the upper atmosphere can be detected at the surface.

The team believe that the day-night fluctuations arise from a combination of how the solar wind and IMF drape around the planet, and solar radiation charging the upper atmosphere and producing electrical currents, which in turn generate magnetic fields.

“What we’re getting is an indirect picture of the atmospheric properties of Mars – how charged it becomes and what currents are in the upper atmosphere,” said co-author Anna Mittelholz, a postdoctoral fellow at the University of British Columbia.

And the mysterious pulsations that mostly appear at midnight and last only a few minutes?

“We think these pulses are also related to the solar wind interaction with Mars, but we don’t yet know exactly what causes them,” said Johnson. “Whenever you get to make measurements for the first time, you find surprises and this is one of our ‘magnetic’ surprises.”

In the future, the InSight team wants to observe the surface magnetic field at the same time as the MAVEN orbiter passes over InSight, allowing them to compare data.

“The main function of the magnetic sensor was to weed out magnetic “noise,” both from the environment and the lander itself, for our seismic experiments, so this is all bonus information that directly supports the overarching goals of the mission,” said InSight principal investigator Bruce Banerdt of NASA’s Jet Propulsion Laboratory in Pasadena, California. “The time-varying fields, for example, will be very useful for future studies of the deep conductivity structure of Mars, which is related to its internal temperature.”

The study is one of six new papers published today that chronicle the first year of NASA’s InSight Mission.

Catherine Johnson will be in France (GMT+1) at an InSight team meeting, with limited media availability. Interviews will be accommodated on a first-come basis when possible.