More women earn university degrees than men today. But a new UBC study looking at heterosexual marriage patterns has found that women still tend to choose husbands who have higher incomes than themselves. This pattern was most pronounced among couples in which the wife had more education than the husband.

Yue Qian, the study’s author and an assistant professor in the UBC department of sociology, discusses the findings.

Women today earn 60 per cent of bachelor’s and master’s degrees, and half of all doctoral degrees, according to your paper. How has this affected heterosexual marriage patterns? 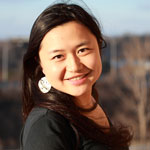 Looking at couples in which the wife had more education than the husband, my study found that women were 93 per cent more likely to marry men who have higher incomes than themselves, compared to couples where the opposite was true.

Despite women being more educated than ever before, you found that they still prefer a husband with a higher income than themselves. Why is that?

Although the gender pay gap is narrowing, it’s still very real. And despite more women earning university degrees today, the expectation of men as breadwinners still influences individuals’ attitudes about what is an acceptable match.

Since choosing a spouse goes both ways, men also have a role to play. Although men value potential wives’ economic roles more today than they did in the past, my study’s findings suggest that they still appear to be reluctant to marry women who are not only more educated than them but who also earn more money.